Earlier this week I saw a post on freecycle from someone wanting a rotary phone. As it happens, I had one. I got it from my mother's great treasure trove of stuff. I didnt want to give it back to my mother because I think she has too much stuff that she doesnt need but cant get rid of because it is still useful. She is a hoarder although not quite so bad that she has mountains of stuff in her house with little aisles through the rooms. Still, my mother has absolutely NO USE for an old rotary phone. I dont even know where she got it but I wouldnt be surprised to learn that she's had it all along.

So here I was stuck with this phone. I didnt really want it but I didnt exactly want to give it back either. And yet, I am enough of my mother's daughter that I also couldnt throw it away. Oh no, this phone still worked you see. So, I did pretty much what my mother would have done and stuck it in my attic where it would have stayed FOREVER had it not been for this request for such an item on freecycle.

When I saw that post I jumped on it like a starving cat on a well-fed mouse. And lo and behold it was fellow blogger Ypsi~dixit who wanted the phone. Even better. Now I could know I was giving the phone a good home which would satisfy the Eileen Fremont code of stuff disposal. Such was this great favor that Ypsi~dixit was doing me that I even offered to drop the phone off to her.

Anyhow, I went over there and gave her the phone. I admired her lovely garden. It is exactly how I would do my own backyard if I either liked gardening or had the money to hire someone else to do it. She has great taste in gardens! Then she gave me a whole bunch of flowers cut from her amazing garden. WOW! I not only got rid of the phone but got flowers too. Lucky me. And they are really nice. Here are a couple of photos. Notice how lovely they make my dining room look! 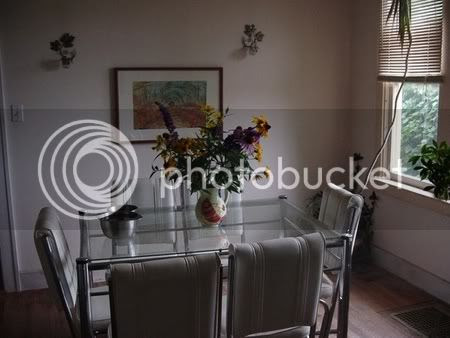 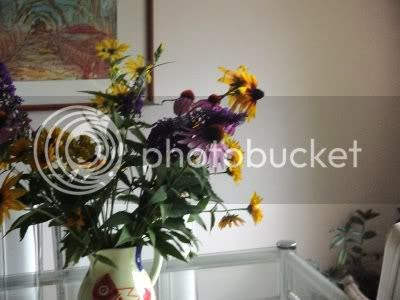 Hey... I wish I could find 'a good home' for some of my appliences too! But I know when I come to handle the stuff over I will hesitate. I will miss my stuff! Oh... I keep out of order devices just because someday they were working & I have memories with them!