Watch Out!!! There is another Fremont in the world

My sister had a baby boy tonight which is very good news. What is not good news is that he is premature. He was born fast apparently and weighs in at just over 4lbs. But, considering his early arrival, he is healthy. I guess we wait and see at this point.

But I know someone who had a premature baby and that baby grew up to be a healthy, beautiful, smart, kid. So it seems hopeful.
Posted by Lynne at 10:34 PM 2 comments:

Email ThisBlogThis!Share to TwitterShare to FacebookShare to Pinterest
Labels: family

I took my cat Ginger to the vet this morning and had her put to sleep. I think she was 19 years old but I dont really know since she wasnt a kitten when I got her. I had her for 17 years or so. She was pretty out of it but still wasnt happy about going. Still, it was a short irritation for her since I took her to the vet closest to my house, Ypsilanti Animal Clinic. They were really great there and the procedure was quick and painless. She had a pretty uncomfortable night last night. She wasnt in pain especially but was so weak that she could hardly walk. She could walk about a foot and then she would have to lay down and rest for several minutes. She was crying in frustration every time she tried to move. I know she just wanted to get to whatever spot she wanted to go to and I would have carried her if I knew where she meant to go. She was pretty dehydrated too as she had stopped drinking water for the most part and I could tell that wasnt especially comfortable for her. It was time.

I buried her in my back yard right in the middle of all the rose bushes.


The Story of Ginger

Ginger was a stolen cat. Her first owners abused her terribly. From what I understand, they beat her and starved her. I was working at a pet store at the time and one of my co-workers stole her from her neighbor in order to protect her. I think some of the odd behaviors she had throughout her life were a result of living in such a bad environment. For instance, she loved to open up packages of food and when she was young and spry, she often would get into the cupboards, open up boxes and bags of dog treats and then eat some and knock some down for the dogs. Needless to say, that increased her popularity with the canine members of the household.

The owner of the pet store agreed to take her as a pet store cat. It turned out, though, that Ginger did not have the makings of a pet store cat. She never was especially social (guests to my house often wondered aloud if I was lying about having a cat since they'd never seen her) so she hid from the customers all day. By night she prowled the store until one night either someone left the giant finch cage open or she figured out how to open it herself. Let's just say that Ginger was an excellent hunter which turned out to be another reason she was ill suited to be a pet store cat.

I had kind of been looking for another cat to be a companion for my cat Fred. The owner of the pet store agreed to pay to have Ginger spayed if I took her in so she came to live me me. I dont remember what her name was before but I changed it to Ginger because I thought Fred and Ginger were good names for a pair of cats. Her first week with me was awful. She went into heat and made my life miserable. She made Fred's life miserable as well as she kept getting amorous with him but with no success because he was neutered. Eventually, she went out of heat and I was finally able to get her fixed.

We moved around a lot. Some of my roommates liked Ginger and some didnt. Her favorite thing is the world to do was to claw up furniture and harass other cats (and especially Jeanne's cat Spock). But she got declawed and after Spock, she never had to live with any more cats other than her buddy Fred.

She did have to live with dogs though. After Fred died, 11 years ago, I brought Brooke into our household. She was 10 months old and had some issues of her own. Ginger always liked Brooke though. Sometimes when I would leave them home alone together, I would come home and Ginger would be crusty with dog saliva since Brooke seemed to like kissing her all day while I was gone. I cant say that Ginger liked that treatment but it is a testimony to how much she liked Brooke that she allowed it to happen. My next dog was Crissy and Ginger loved Crissy too. Sometimes out of the corner of my eye, I would catch Ginger giving "love bites" to Crissy. Then came Cookie who only was with us a short time. Ginger *hated* Cookie. Cookie was part Border Collie and had a hobby of herding cats. Ginger, it turns out was not very fond of being herded. She tolerated Cookie although sometimes Ginger would sit in the middle of the floor and hiss when Cookie walked by. And lastly, Ginger had Tasha. She didnt like Tasha at first but Tasha treated her very much as Crissy did, i.e. with a lot of respect and an acknowledgment that Ginger was the one who wore the tail in the family. Ginger warmed up to Tasha quickly and for the last several months, I sometimes found them sleeping in large dog bed together.

Ginger was a very bossy cat. She pretty much ran the show around here. I sometimes joked that if there were such a thing as reincarnation, she surely had the soul of a great general. I wonder if I will know what to do with myself without her to boss me around.
Posted by Lynne at 2:57 PM 2 comments:

My cat is probably going to die very soon. She isnt eating and can barely walk. She isnt in any pain though and trust me, she is the sort who would let the world know if she were. So for now, I am not going to take her in to be put to sleep since her least favorite thing in the world is to go anywhere in a car but she especially always hated going to the vet's office. She's 19 years old. It is the end of an era of my life, for sure. 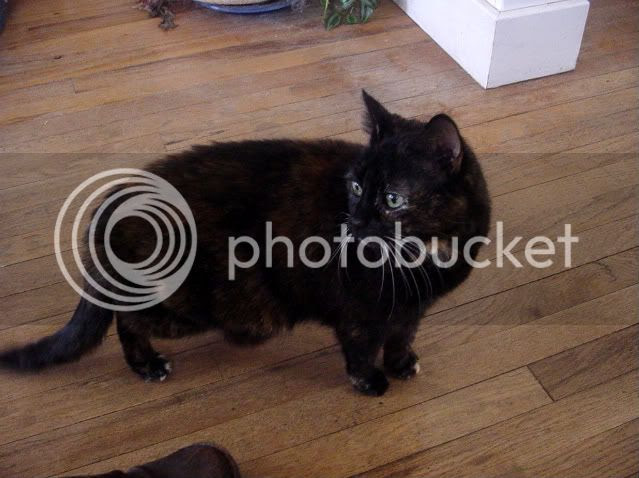