This is my account of my own experience of Obama's Inauguration. I stayed at my brother and his wife's house in Vienna, VA. My young nephews generously shared a bedroom while I was there so I could have my own room. By complete coincidence some friends of mine from Seattle were staying in a hotel in Vienna, VA that was only 1/2 mile from my brother's house.

I met up with my friends Beth and Barry, Beth's mother, Gratia, and their daughter B. at the Vienna Metro station. Although we all left the house very early, we didnt get downtown until around 10:30am which was too late to get anywhere in front of the Washington Monument. 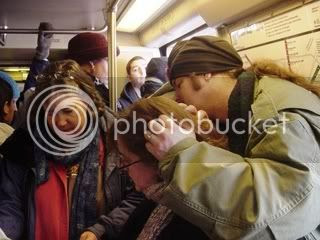 The trains were running slowly because someone was pushed or fell onto the metro tracks so they had to turn the trains around before that station. That person was not seriously injured because of the quick thinking of some guy on the platform who knew that there was a space under the platform. He pushed her into the space and the train missed her. I was relived when I heard that. Click here for the story.

My brother was a couple of trains ahead of me because I wanted to wait for Barry/Beth et al and I figured I would text him and then find him once we got down there. While on the train, someone else got a text that streets were closed near the mall so we decided to get off the Metro at Foggy Bottom. Once I got out of the station, I got the text from my brother to get off the train at Foggy Bottom and head towards the WWII memorial. That was just one of many lucky occurrences that surrounded this event. I mean, I missed my brother's text but did the right thing anyways.

Once we got there, there were already too many people for me to find my brother even though he texted me his exact location. I could see where he said he was but I couldnt get over there. So I found a spot near a tree and sat down for a while. I had a pretty good view of the jumbo-tron for most of the ceremony but eventually the space in front of me filled up so I had to stand to see. It got really crowded even way back where we were. I mean crowded like you could barely move crowded. It looked like there were crowds all the way back to the Lincoln Memorial! 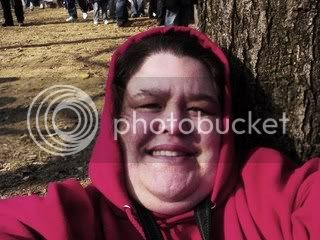 During the swearing in people were *very* emotional. There was lots of crying and hugging strangers and cheering. It was awesome! When Aretha came on, I yelled out "Detroit Represent!" and lots of people near me cheered and said they were from Detroit too. 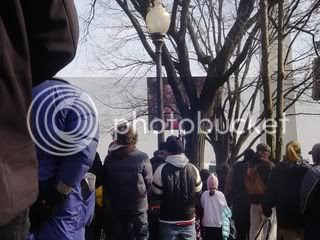 After the swearing in, some people started to leave so I sat down again and watched the rest of the program. I was really happy to have found such a comfortable spot. It was a little cold but not too bad. I was only cold because I had taken off my coat to sit on it. Once it was over, I put my coat back on and was fine.

When it was time to leave, there was discussion about heading towards one of the museums to warm up but it quickly became obvious that there was NO WAY we were going to make it to one of the museums. We stood in a huge crowd that was moving towards the streets. It was remarkable because there was no pushing and no shoving even though the crowd was so dense that everyone was pressed up against everyone else. I have never been around such a mellow nice crowd except for at some Dead shows but those people were high. These folks were just plain NICE although there was some cheering and out breaks of a certain Bananarama song when the helicopter that may have contained Bush flew overhead. 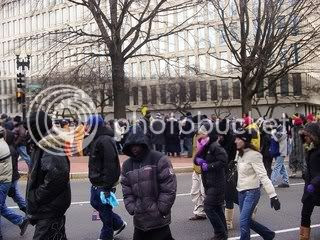 Eventually we made our way back to Foggy Bottom where we ended up in a big crowd waiting to get into the station. They were limiting how many people could enter the station at one time, possibly because of the earlier incident. After around 45 minutes in yet another incredibly nice and pleasant but very dense crowd, we got into the station. I was impressed with the transit workers who were in charge. They kept making everyone repeat "when the person in front of you goes, you go" and "when the person in front of you stops, you stop" and cracking jokes so again, there was no pushing or shoving and lots of laughter. I think they took a potentially dangerous situation and made it much safer so huge props go to the Metro staff. 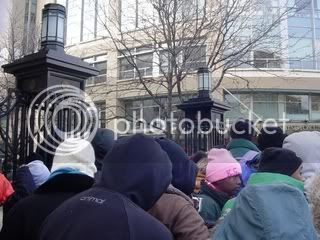 Eventually we got in but everyone was tired so we got on a train going the wrong way because it had seats and we just rode to Maryland and then eventually got off and got on the train in the right direction. There is nothing like a little discomfort to make one appreciate things like a seat on a warm train. People were very nice on the train too. One guy even gave us a free bumpersticker 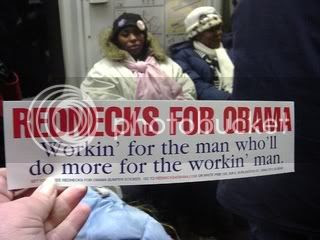 Eventually, we made it back to Vienna. We met up with my brother then and we all went out for a very nice dinner. 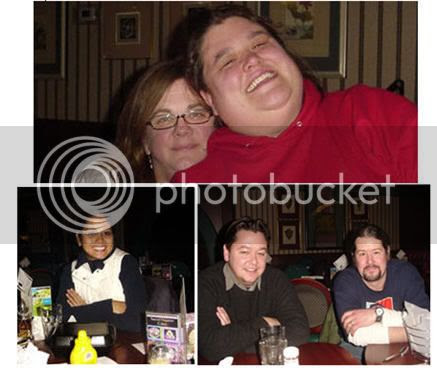