I keep thinking that I want to write a little bit about my Baba's life since it was a pretty interesting life and certainly a long one. I am not especially ready for that yet though.

My grandmother was 93 years old. She died while eating breakfast. She had a waffle shaped like Mickey Mouse. My aunt said that she had eaten two ears and half a face before she died. She didnt choke. She wasnt ill. She just woke up that morning, sat down to breakfast, ate half of it...and died. Not a bad way to go if you ask me.

So, I caught a cold at the funeral from kissing too many relatives I guess. So I am cranky. Which is why it sucks that I cant get Jim Carroll's People who Died song out of my head. I feel like I want to add another verse:

My last remaining grandparent died this morning. It hasnt really hit me yet but I am sure it will. She lived a long life and was well into her 90's so it isnt exactly surprising but well...I guess I feel a little surprised by it. Are we ever really ready for someone's death?
Posted by Lynne at 7:03 PM 2 comments:

I have to say that one of the nicest things about working downtown is that I run into people I know almost every day. I ran into Kate the other day which was fun. I havent talked to her in a while and she walked me to the bus stop and chatted while I waited for my bus which certainly is a nice way to pass the time.

Yesterday morning as I was hurrying along Main Street, I ran into my friend Aviva's mother. Then, as I was sitting at my desk looking out at the Fleetwood, I saw Aviva herself helping her husband put up flyers for his band's show next weekend at the Heildelberg.. Later, I went over to the Fleetwood for lunch where I heard the full story about the flyers. Apparently there is some guy named "Richard" who goes around taking down people's flyers. Aviva caught him taking down her husband's flyers and yelled at him. I wish I had seen that! 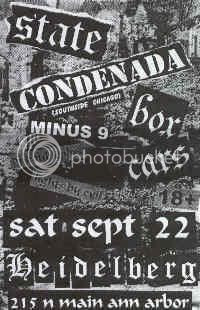 I can be pretty lame sometimes. This past Saturday, I went on a tour bus trip to a casino. My friend, Heather, volunteers for a charity and her charity had a fund raiser where folks paid $25 bucks for a bus ride from Belleville to Greektown Casino. So I figured it is for a good cause and I enjoy Greektown *and* gambling *and* Heather's company so I signed up for the event. We went out to dinner at Hellas which has been a favorite place of mine since the first time I was taken there as a small child and the waitress came out with the OPA! cheese. It is funny because I have always wondered about the people arriving at Casinos in big tour buses. I always wondered what kind of person would decide to go to the casino on a big ole party bus. Now I know :) Anyways,I won $50.
Posted by Lynne at 6:46 PM 3 comments:

Well, my second week at the new job seems to be going well. Folks there seem to think I am doing a good job which is good. I have some ideas for making things more efficient that I hope they will like. The commute remains terrible. Today I dropped off my Dad's car at the body shop and took the bus into work. That wasnt too bad. But coming home was a NIGHTMARE. It took me an hour and a half door to door. Yuck. Oh well. I guess I know what to expect tomorrow though.

I got to thinking about the economics of public transportation though. In the past week and a half, I have ridden on several AATA routes. The buses always have plenty of riders. This morning the #4 was so crowded, I wasnt sure anyone else would be able to get onto it. Granted, I am only riding the bus at rush hour but still... Anyways, it seems to me that one of the biggest costs for the bus is labor so I started thinking about ways that AATA could reduce labor costs while making people's commutes better too.

The answer is technology. I know this is a pipe dream but I wonder if the technology exists to build some kind of elevated light rail/monorail that doesnt need a person driving the train. And if so, I wonder how much it would cost to build such a thing. I imagine that it must cost a lot. And by "a lot" I mean an amount where the AATA wouldnt be able to recoup the costs quickly enough with whatever labor savings they might have. Still, it would be nice to have such a thing running between Ann Arbor and Ypsilanti. It seems to me that if one could get from Ypsi to Ann Arbor in 20 mins or so without getting stuck in traffic, more people would become mass transit riders.

Well, enough with the bus I guess...

Labor Day Weekend was really nice. I had people up to the lake on Saturday and Sunday. We had a blast. Shannon brought me a birthday cake on Sunday which was really nice. The weather was great. We swam a lot. It was all good.
Posted by Lynne at 6:58 PM 3 comments: