As I drove home from work tonight, the moon was rising. It was this huge orange ball hanging just above the buildings of downtown as I drove down Michigan Ave. I couldnt stop looking at it, it was so beautiful. It didnt particularly match my mood though. It was at peace while I was still wound up from my day.

I have been stressed out at work because it is the holiday season and we get really busy and my bosses get especially worked up about things.

I have been worried about one of my dogs. For the past week or so, she has been very lethargic and hasnt been eating much. On Saturday, she collapsed outside - she just walked out onto the porch and fell over onto her side. I had to carry her back into the house. She recovered from that episode but collapsed again on Monday. Then she got better. Then she got worse. Finally, I took her to the Vet on Wednesday morning.

He said that she has a problem with her spine. It could be a tumor putting pressure on it or it could just be a bad back. He said that there was no point in taking an x-ray because at her age, if it is cancer, there is no point treating it (she is 13 or 14 years old). So the plan is to put her on prednisone to treat what is most likely causing her symptoms if it isnt cancer. If she has cancer, she will get worse and will most likely die in a month or two. If it isnt cancer, she should get better.

So far, I think she is getting better. She has seemed like her old self since starting this medication yesterday but it is only two days so who knows? The medication makes her thirsty though. When I came home at lunch, she had had a small accident (just a few drops really), most likely out of excitement that I was home *finally* to let her out. I think I will have to restrict her water while I am at work. That is hard though. I mean, I know that I don’t like being thirsty but then I don’t like having to piss really bad when there is no bathroom available either. Oh well. The truth is that I hope like hell that I’ll have to worry for a LONG time about making sure she has lots of opportunities to get outside.

Still, sometimes death seems so unfair to me which is funny because death is probably the most fair thing there is in the world. Every one gets a death. 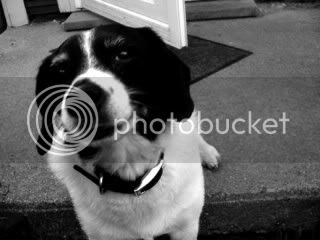 Email ThisBlogThis!Share to TwitterShare to FacebookShare to Pinterest
Labels: dogs

hope your pup feels better! It is so hard watching our animals in pain.

She's a beauty. Your dog pictures are all great.

We were told last spring that our 13 y.o. dog probably only had a few months left - happily, they were wrong, but it is clear she can't have too much longer left. We've spent the last 8 months trying to pamper her and enjoy her, and realizing each day is a gift.