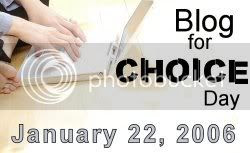 Today is the 33rd anniversary of Roe v. Wade and it is also "blog for choice day." The truth is that I dont have anything to say about this subject that I havent already said a thousand times before. Basically, I believe that women have the right to make decisions about their own bodies. We have the right to made their own decisions about medical procedures including elective abortions.

Abortion is still a right I consider fundamental. Can there be a right more basic than the right to choose what to do with one's own body? Oh I know there are those in the Anti-abortion camp who would say that a right to life is more basic but I disagree. Death is a normal part of the human experience and in no other matter is a person given a right to life that is greater than another person's right over their own body. Oh sure there is "Your right to extend your arm ends with my nose" rules but those are very different than the situation with abortion. A woman choosing to abort a fetus is more similar to someone refusing to donate blood even though doing so surely would save a life.

This issue is greater than simply one about if women can be allowed to terminate pregnancies. It brings to the surface many buried anti-feminist ideas in people. While there are some people who are anti-abortion who actually believe that this issue is about children and who show this in other ways by supporting programs that help all children including those who have been born, it has been my experience that most in the anti-abortion camp are really against women having any kind of power in our society. They see pregnancy as a punishment for being a slut and abortion as a way to get out of paying the piper so to speak. It is easy to recognize these folks. They are the ones saying things like "abortion should be illegal except in cases of rape or incest" and "women already have a choice...the choice not to spread their legs" and so on. Often these people are against all family planning including birth control because they arent as concerned about abortion as they are about women having control over their sexual lives. They dont want a whole bunch of women feeling entitled to have as much sex as they want with whomever they want even if they are not married.