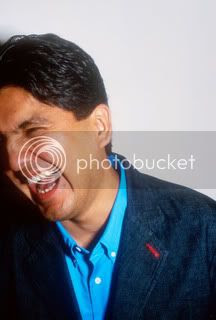 Sometime ago, I had a literature class where we read a collection of short stories written by Sherman Alexie called The Lone Ranger and Tonto Fistfight in Heaven. There was one day where a friend called me to tell me that a mutual acquaintance of ours had committed suicide the night before by jumping in front of a train. That very evening I settled onto my couch to do some required reading for my class. I live next to the train tracks and trains come through several times a day and, as it happens, a couple of trains went by while I was reading.

The story was one of the most powerful stories I've ever read. The things going on my real life while I read it just made it more so. The story was A Train is an Order of Occurrence Designed to Lead to Some Result which you can read HERE

Since that time. Sherman Alexie has been one of my favorite authors. I admire him. I am jealous of his gift. I find his work entertaining. He makes me think. I guess you could say that I am a big fan.

Last night, I found out that Sherman Alexie is going to be speaking at Eastern Michigan University on Monday, November 5. Better still, as far as I can tell, the event is free!
Posted by Lynne at 4:15 AM

I'm reading his latest book right now! It's for older kids or YA; "The Absolutely True Diary of a Part-Time Indian." And though I'm only 3 chapters in, it is very, very good.

I wish I could see one of my favorite writers for real... to hear them read some parts to me.. you know!