A week revolving slightly around Anna

It has been a very busy week for me. I kind of like it...having stuff to do.

On Sunday I had lunch with one of my oldest friends. It is nice having friends whom one has known since forever. I think I must have been around 4 y/o when I met Anna/Auhna which means she is one of the few people outside of my family to have known me when I was a kid. We went to the Blue Nile in Ferndale which is pretty much like the Blue Nile in Ann Arbor. Very good but kind of expensive. Mostly we talked about Anna's glamorous life in L.A. I didnt have as much time to spend with her on this trip as I would have liked. She returned to LA on Wednesday.

Then, today, I went to Detroit with my friend Heather because I had free tickets for a play at the Hillberry. We got there early so we went for a little walk and then ran into "BillyLeopard" , an old high school friend of mine who also just happens to know Anna. I didnt have too much time to talk to him because we had to go to the play but it was nice to see him anyways. 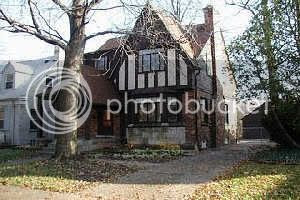 After the play, Heather and I went for a little drive around the city. We drove up to the old neighborhood where I showed her where I used to live. And then we noticed that Anna's old house was for sale and having an open house! The owner was very nice and let us have a quick tour even though I admitted I wasnt really looking for a house to buy. Still there is a part of me that wants to just because it is a great house at that price. It is not only a great house but it is a GREAT neighborhood: all tree lined streets and beautiful old houses built mostly in the 20's. The 1920's is just one of my favorite eras for houses. My own house was built in 1925.

In between all of that, I am working full time and going to school full time and trying to keep my lawn mowed.
Posted by Lynne at 7:57 PM

I can't help but to feel jealous! I wish I had a friend like that, well, actually I guess I would like to visit one of my olf friend's old house! We used to play there a lot!