There is one practice that seems to be very common these days that I particularly dislike. That is the practice of offering an "introductory price" for a period of six months to a year for a service and then jacking up the price at the end of the term. Especially since companies (and in particular, AT&T) dont always make it obvious either that they are doing that or what the actual full price is. I clearly is a practice designed to charge people who dont pay close attention to their bills extra. Or to charge people who dont know that they can get the introductory price back if they simply ask. Ok, it must be a practice that works for companies like AT&T or else they wouldnt keep doing it but it just smacks of "Let's SCREW the customer" to me.

Now, usually, because I am very much aware of this practice, I am good about calling them up before my term expires and demanding the introductory rate for another period of six months to a year so my only cost is the time I have to spend on the phone waiting to talk to someone (usually between 1/2 hour to an hour). But this year when my special introductory rate for my DSL expired, I forgot and got charged the full price.

That alone would have made me angry because I dont like paying money I dont have to plus it would have reminded me of how much I hate this practice in the first place. But this time I got especially angry because it appears the the full price is more than FOUR times the rate I was paying before! 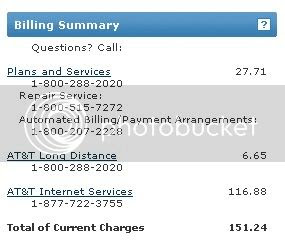 I wasnt happy about that at all so I called AT&T and spoke to just about the rudest excuse for a customer service person in the world. She was so bad, she was almost comical. Now, it might be true that I just unlucky and got someone who isnt good at her job and who will soon be dealt with by a corporate culture that values both good employees *and* their customers. But honestly, I dont think I have *ever* gotten good service from AT&T. The really sad thing though is that as far as I can tell, the alternatives arent any better. *sigh* The practice of the intro rate followed by the jacked up regular rate is an industry standard.

Part of me wonders though what would happen if someone started a phone company with a decent pricing structure and good customer service. Would it change the world?
Posted by Lynne at 1:35 PM

Eww...
Customer services suck most of the time.... I just hate calling them!