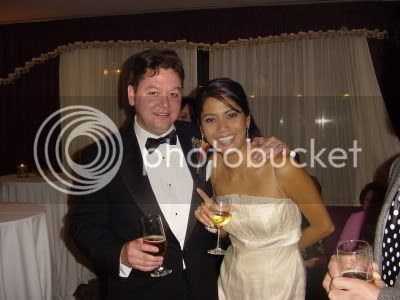 I just got back from Toronto where my brother got married yesterday. It was a really nice wedding. They got married in a Catholic church. The priest was really funny. He was telling his little sermon and he started telling a story about sick man whose doctor told his wife that because he was so sick, he would really need to be taken care of. That he wouldnt be able to do anything around the house and she would have to cook for him and clean for him and essentially do his every bidding or else he would die.

I was sitting there thinking, "OH man, this is another one of those speeches about how a good wife has to obey her husband and cater to his every need" and while he was telling this little story I was already thinking about the blog I would write about how such attitudes grate on me.

Then, he finished his story. After the doctor tells the wife that she has to do everything for him (cooking, cleaning, laundry, etc) including his every bidding or else he will die, the wife goes in her husband's hospital room and lovingly picks up his hand and looks deep into his eyes. The husband says, "What did the doctor say, honey?"

She says, "I am afraid it is bad, dear. It seems that you are going to die"

After the wedding, there was a reception at the hotel where everyone was staying and we did the usual chatting with everyone routine and getting to know Katrina's family a bit better. Katrina has a really neat family. They are all very interesting people. I really enjoyed talking to one of her aunts who is a Spanish diplomat's wife. She lives in Malina and flew all the way to Toronto just for the wedding. She said that all throughout her marriage they have moved to a different country every 3 or 4 years. She speaks something like eight languages!

Everyone at the wedding had all kinds of fun telling the story about how Jonathan and Katrina met. When my brother was eleven years old, my family was involved with a group called Children's International Summer Villages. They sent my brother to a village in the Philippines. Katrina's mother had recently gotten involved with CISV there and had sent Katrina the same camp. They included a photo of them both taken at the camp when they were 11 years old on their invitations to the wedding. Anyhow, they kept in touch through the years and one thing led to another and now they are married. Kind of cool when you think about it.

Anyhow, I had a nice time. Whatever bitchiness my mom had going on on Thanksgiving had worn off and she very pleasant the whole weekend. Everyone else in my family was on their best behavior too, including me. Even certain crazy members of the family managed to tune down the crazies and all was well and good.
Posted by Lynne at 4:19 PM

wow she is gorgeous!

What an adorable couple! Your brother looks exactly like you!!

He looks exactly like me but more masculine, right? ;)

Wow what a cute couple, and what a neat story of how they met!

she is very pretty.