Crissy had a rough night. She slept until 3am or so. Around that time, I heard her try to get up and I heard her collapse on the floor when she couldnt quite make it. She had some more diarrhea so I cleaned that up and I gave her some more water to drink.

At 7am, she wasnt sleeping but she wasnt doing much besides lying in her bed. Her breathing was labored and she didnt look particularly comfortable. I decided that I had to take her to the vet.

Unfortunately, my vet had a family emergency and wasnt there. The office was closed so I had to drive over to the Emergency Vet. They examined her and said it didnt look good. The vet there said that he was pretty sure that her organs were shutting down. I ordered a lot of tests anyways because I felt that I needed to be sure. They found that her kidneys werent functioning nor her liver which had a mass. Her red blood cells were very very low. Her heart was very enlarged. Basically, she was dying. So...I made that decision that is always hard to make and I had them put her down.

And now I miss her.

I don’t know much about her early life. She was adopted as a young adult dog by a group home for mentally ill adults. She lived there for several years until the company that ran the group home lost their contract to run it and the new management said “No Dogs.” The residents of the home were apparently heartbroken but the dog had to go.

I worked for the company that used to run that group home. Crissy was homeless and headed for the pound. I felt that I couldnt let that happen because since she was an older dog, going to the shelter probably would mean certain death. So I took her in on a temporary basis until a more permanent home could be found for her.

At the time, I had a dog at home (Brooke) who just wasnt doing well being alone during the day. I found that after Crissy came to live with us, Brooke’s daytime destruction and crying really got a lot better. Within a few weeks, Crissy had settled in. Even the cat liked her. That was eight and a half years ago. 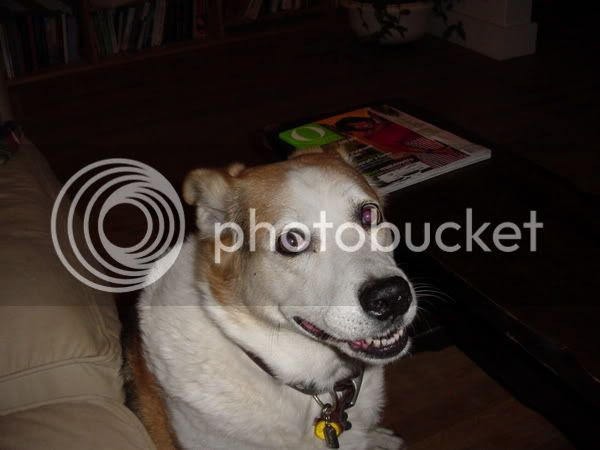 Lynne, I'm so sorry. I'm actually crying because it breaks my heart. She looked like such a wonderful little soul.
(((HUGS)))

Oh man I am so sorry about your dog. I am sitting here bawling. I totally feel your pain. Losing your pet is just awful. Uggh. And is so hard to have to make a decision to put them down.

It sounds like you did the right thing though. She can't have been very happy if all her organs were shutting down.

Thanks for posting about her. She sounds like she was a very good dog. And you really did the best you could for her in her last few days.

I'm sorry, too. I have a 13 yr. old dog and it is going to be so hard to lose her. I hate the fact that dogs don't live longer.

That's a great picture of Crissy. She looks like a happy dog.

Thanks for your kind words everyone. They are very much appreciated. She was such a good dog and it seems so weird in this house without her.

Lynne,
I'm really sorry. If there's anything I can do to help you during this time, let me know.

Lynne, I am so, so sorry for your loss. I know how heart breaking this is. I cried for a week when we lost our Lucky Dog in June. We love our babies and do our best for them. She was most lucky to have had you for the last eight years!